It’s been awhile, but Tom Coughlin still remembers what it was like to call plays.

To stand on the sideline and play the game of chess versus the opponent’s defensive coordinator, working tirelessly to find the perfect play on that laminated sheet to counter a play you’re not certain the defense will run.

Just as much as any of that, Coughlin remembers what it was like if anybody tried to walk up to him during a game and offer advice in the middle of drives drives.

“I’ll be honest with you,” Coughlin said. “I never liked anybody interrupting me.”

It’s that reason why Coughlin will let new Giants offensive coordinator Ben McAdoo do his thing Monday night in Detroit. If the first-year play caller needs help, Coughlin will offer, but for the most part, McAdoo will be left alone.

“Ben McAdoo is a solid, solid football coach that knows what he is talking about,” Coughlin said. “He has an excellent system, applies himself every day and is very smart.” For the first time in over a decade, the Giants will open the season with a far different offensive scheme than the one that helped the team capture two Vince Lombardi trophies within the last eight years.

The offense is designed to get the receivers the ball in space, move the pocket and have quarterback Eli Manning put the ball into tight windows. No longer are there many seven-step drops. Instead, three-to-five before Manning is supposed to hit his back foot and fire away.

During the Giants five preseason games, the offense has displayed glimpses of what the offense can do when clicking on all cylinders. There was a long two-minute drive versus the New York Jets in the third preseason game, a 73-yard touchdown run by Rashad Jennings versus the Pittsburgh Steelers. But in between each solid play were four-to-five negative ones.

Come Monday night versus the Lions, Coughlin hopes it much more good than bad. 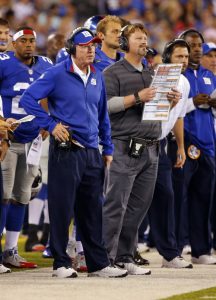 “We’re preparing ourselves the best we can and I’m sure that our players will get ready and will be highly competitive.”