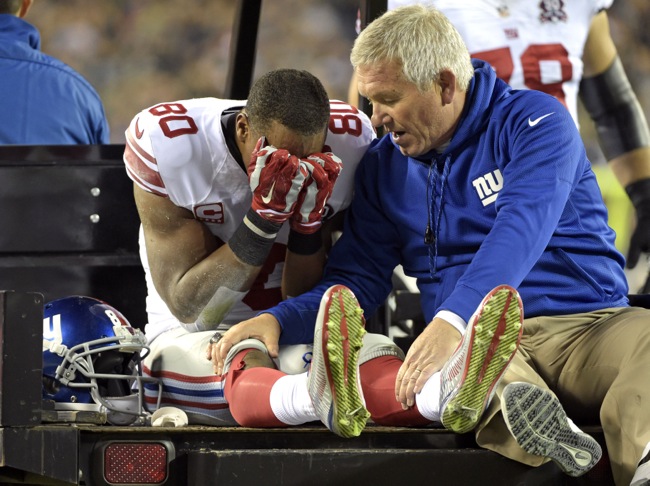 In a critically important game for both teams, the New York Giants were embarrassed 27-0 by the Philadelphia Eagles on Sunday night at Lincoln Financial Field. The Giants fell to 3-3 (1-1 in the NFC East) behind the now 5-1 Eagles and 5-1 Dallas Cowboys. The Giants face the Cowboys next Sunday in a game that may determine the fate of their season.

Worse than losing the game, the Giants lost WR Victor Cruz for the season with a torn patella tendon in his right knee. The injury was so severe that Cruz was forced to stay in a hospital in Philadelphia overnight.

“It was tough to say anything,” QB Eli Manning said. “I just went over and patted him on his shoulder. Even if I did say anything, I don’t think he would’ve heard me, he was in so much pain.”

“That’s extremely tough,” S Antrel Rolle said. “He’s just down there screaming. That’s your brother down there on the floor.”

In addition, CB Dominique Rodgers-Cromartie left the game in the second quarter with a back injury and did not return. CB Trumaine McBride also left the game with injured thumb that required a cast.

As for the game, it was a failure across the board for New York on offense, defense, and special teams.

“In this league, you can’t take days off. You can’t take them off,” Rolle said. “We took (Sunday) off. Everyone took the day off.”

“It starts right here at the top,” Coughlin said. “Very, very poor performance. I take full responsibility for it. And there’s not a lot to say about it. Not a lot to say.”

The Giants offensive line gave up eight sacks and could not open up holes for the running game. Heading into the game, the Eagles secondary was ranked 29th against the pass, but Eagles’ defensive backs were able to successfully press the Giants’ wide receivers at the line, and forced Manning to hold onto the ball longer than usual.

“It was great coverage,” Eagles’ Defensive Coordinator Billy Davis Jr. said. “We pressed up on guys and we were disguising some coverages, you know with a guy like Eli you have to show him one thing and give him another and just moved it around on him a little bit.”

“That’s the thing,” Eagles’ LB Trent Cole said . “Him holding onto the ball, that surprised me. Eli, he’s a guy that just gets it out quick, gets it to his receivers and he’s very accurate. I’ve always given it to him, I think he’s a great quarterback and I still think he’s a great quarterback. But, hats off to our secondary, man. I’m just very happy about how the were playing and making him hold onto the ball.”

Other Eagles said the Giants’ offense was easy to predict and defend.

“We knew if we gave (Eli Manning) a certain look, he would check to certain things,” said LB Brandon Graham. “We knew (what) was checking at the line…Everything (we thought) was going to happen, happened in the game.”

“I wasn’t surprised,” LB DeMeco Ryans said. “They did the things they showed on film.”

Defensively, the Giants allowed the Eagles to score 10 points on their first two drives as New York quickly found themselves in a 10-0 hole. The Eagles added another 10 points in the second quarter as the game was practically over by halftime.  Philadelphia gained 448 yards of offense, including 203 yards rushing.

Special teams were not better with the Giants giving up a 43-yard punt return and having a punt partially blocked.

The Giants were also penalized 10 times for 74 yards.

The Giants had talked a lot of trash leading up to this game, but in the end, the Eagles had the final word.

“I said when (the Giants) were talking all week that we would see what happened on Sunday,” LB Trent Cole said. “Well, we saw what happened Sunday.”