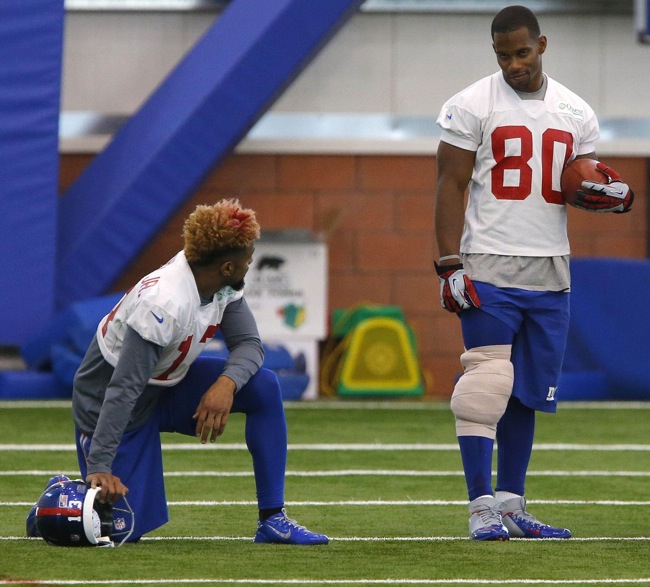 VICTOR CRUZ SAYS HE’S 80% LIKELY TO RETURN TO GIANTS…
In an interview with USA Today, New York Giants wide receiver Victor Cruz said there is an 80 percent chance he will return to the team in 2016. Cruz has three years left on his current contract, but he missed most of 2014 and all of 2015 with injuries and it remains to be seen if he can regain his pre-injury form. Cruz is currently set to count $9.9 million against the team’s 2016 NFL cap, the second most by a player after quarterback Eli Manning. It has been speculated that if Cruz does not accept a pay cut, he may be released from the Giants.

REPORT – JERRY PALMIERI MOVES TO PERSONNEL DEPARTMENT…
NJ.com is reporting that Jerry Palmieri is now assisting the personnel department of the New York Giants. On the surface, it appears to be an odd transition for recently replaced strength and conditioning coach. Palmieri has been with the team since Tom Coughlin’s arrival in 2004, serving 12 years as the strength and conditioning coach. After six straight years of being one of the most injury-plagued teams in the NFL, the Giants replaced Palmieri with Aaron Wells earlier this offseason. REPORTS – STEVE SPAGNUOLO EXPECTED TO REMAIN WITH GIANTS…
According ESPN Radio out of Philadelphia, the New York Giants have denied the Philadelphia Eagles permission to talk to Steve Spagnuolo about the Eagles’ vacant defensive coordinator position. Although there is no official word from the Giants, ESPN and The New York Post are reporting that Spagnuolo will remain the team’s defensive coordinator in 2016, despite the fact that his defense finished dead last in the NFL in 2015.

Eagles explored idea of bringing Steve Spagnuolo to Philly as DC, but he now is expected to remain with New York Giants, per league source.

Flaherty and Palmieri have been with the Giants since 2004 when Tom Coughlin was hired as head coach. Nunn has been with the team since 2010. He will apparently be interviewing for the same position with the Tennessee Titans.

Other position coaches to leave the Giants this offseason include Wide Receivers Coach Sean Ryan, Linebackers Coach Jim Herrmann, and Assistant Special Teams Coach Larry Izzo. Ryan and Izzo are now with the Houston Texans and Herrmann is with the Indianapolis Colts.

REPORT – GIANTS INTERESTED IN FRANK CIGNETTI FOR QUARTERBACKS COACH…
According to FOXSports, Frank Cignetti, Jr. is “in the mix” for the quarterbacks coaching position on the New York Giants. That position was held by Mike Sullivan in 2015, but there are reports that Sullivan will be promoted to the team’s vacant offensive coordinator position.

The 50-year old Cignetti has been with the St. Louis Rams for the last four years, first as quarterbacks coach (2012-2014) and then offensive coordinator (2015). Cignetti was fired by the Rams in December.

JASON PIERRE-PAUL HAS MORE SURGERY ON HIS HAND…
As expected, New York Giants defensive end Jason Pierre-Paul had additional surgery on his permanently-damaged right hand on Monday. Pierre-Paul suffered catastrophic injuries to his hand during a July 4th fireworks accident, leading to the amputation of his index finger and severe damage to his middle finger and thumb.

“The surgery is definitely going to help me a lot,” Pierre-Paul said in late December. “I can’t grip out of my middle finger. It can’t close right now, that’s the reason why I’m in the club. Once I have my surgery, I’ll be fine. I’m excited to actually get it done. Something I knew I had to get done at the end of the season.”

Pierre-Paul played in eight games in 2015 and finished the season with 26 tackles, one sack, and six pass defenses.

ODELL BECKHAM HONORED…
New York Giants wide receiver Odell Beckham, Jr. has been voted to the Pro Football Writers of America All-NFC team. Beckham was the only Giant to make the team. Beckham played in 15 games in 2015, and finished the season with 96 catches for 1,450 yards (15.1 yards per catch) and 13 touchdowns. He was also voted to the Pro Bowl.

Lord I absolutely believe you have the power to heal. You demonstrated that on earth and through me already, and you still heal in miraculous ways for me and many others. Even when my faith is weak, you say it is enough, and my love for you is strong. And I know you already hold my heart and life in your hands. It's up to you. If I can bring you more glory through healing, then that's what I ask for. #90powerCircle #SurgeryDay #ImSoReady #JustTheBeginning