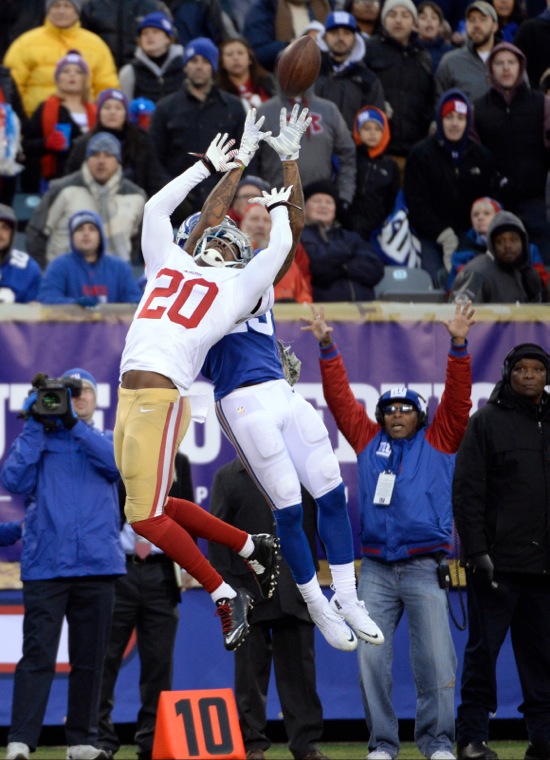 “I don’t know (if Pugh will practice this week), we will see, he’s day to day,” said Head Coach Tom Coughlin.

November 19, 2014 New York Giants Player Media Q&As: Transcripts and video of media sessions on Wednesday with the following players are available at Giants.com:

Articles on QB Eli Manning and the Giants-49ers Game:

Giants Activate OG Geoff Schwartz Off Short-Term IR: The New York Giants activated offensive guard Geoff Schwartz off off  Injured Reserve/Designated for Return or short-term injured reserve. Schwartz was placed on Injured Reserve on September 3 because of the dislocated right big toe he suffered in the preseason game against the New York Jets on August 22. Today was the deadline for the Giants to activate Schwartz or place him on season-ending Injured Reserve.

To make room for Schwartz, the Giants waived linebacker Justin Anderson, who was signed off of the team’s Practice Squad on Saturday. “I am ready to go,” Schwartz said. “I had a couple good weeks of practice. Last week was real good. I took every rep for the scout team. I felt good out there. I expect I’ll be ready to go…It was a pretty significant injury. It takes a little time for it to heal. Once you get it healed, it takes a little bit of time to get your strength back and that is kind of what it took.”

Schwartz was starting at left guard before he got hurt. He has experience at right guard and right tackle as well.

“I have no preference (about what position he will play), other than getting him going,” Head Coach Tom Coughlin said about Schwartz.

“I’ve started 11 games at tackle.” Schwartz said. “I played three and a half quarters last year at tackle in the last game of the season. I can play tackle. Obviously, I was signed as a guard, but I think they like my versatility, and I feel comfortable definitely playing tackle.”

That versatility should serve the Giants well as RT Justin Pugh was forced to leave the game on Sunday with a strained quad. His replacement, Charles Brown, was terrible, as was starting RG John Jerry.

Article on the New York Giants Offensive Line: As boring as it sounds, it’s still all about the offensive line by Dan Graziano of ESPN.com Inside Football Player Q&As: Transcripts of Q&A sessions with the following New York Giants players are available at InsideFootball.com:

Article on New York Giants Training Camp Battles: Giants have plenty of jobs up for grabs as training camp nears by Ebenezer Samuel of The New York Daily News

Article on DT Mike Patterson: 10 Giants you should know when training camp begins: Mike Patterson by Conor Orr of The Star-Ledger