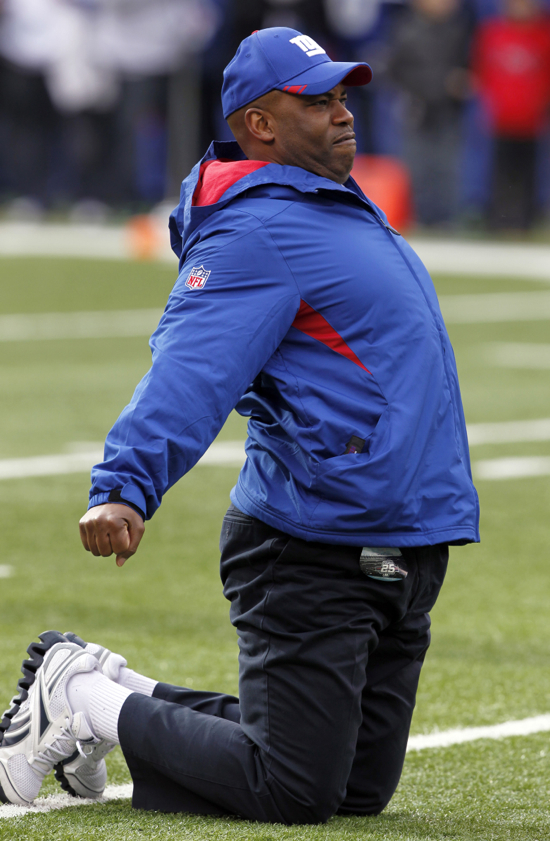 By BigBlueInteractive.com Contributor Daniel in MI

The warden finally allowed us to watch the tape of the Giants-Cowboys game now that we have been released from the Hole. (Editor’s Note: When your job is in the prison cafeteria, people need to be specific when they ask for a tossed salad. ‘Nuff said.) The Outsider Report (TOSR) staff carefully examined the tape, and then asked to be put back in the Hole. That request denied, we decided to write up our report. As always, although we lack any contacts, inside information, derrière millinery, or media passes, we nevertheless bring you the truth beyond the facts. Although much of what we write is apocryphal, or at least wildly inaccurate, it scores over pedestrian media in two important ways: 1) it’s free; and 2) we use only the most effervescent fonts.

In our view, the key to this game was the inability of the Giants to get any pass rush. Some observers astutely note that when you give quarterbacks 8-10 minutes in the pocket, they tend to find open WRs. It seemed like no matter what the Giants did, there was little pass rush. This was especially true in the second half when Dallas QB Tony Romo had exactly zero incomplete passes. (This, sadly, negated the usual Giants second half D motto, “It could have been worse!”)

So, it was gratifying for TOSR sources to learn that the league this week launched an investigation into the whereabouts of the Giants LBs and what happens to them when they rush the passer. At a press conference held by Rodger Goodell he said,

It has come to my attention that during games, defensive players for the New York Football Giants seem to be disappearing from the field of play. Our film analysis shows that this is taking place on plays in which Linebackers rush the passer. They leave the defensive backfield toward the opposing Quarterback and then… just, well, vanish. It has happened game after game. Fans have asked us to look into it, and we are responding. We have used the chips embedded in their pads this year to try and track them with telemetry, but the signals just go blank. It’s as if they enter the Bermuda Triangle on the field. Then after the pass is complete, the data begin again as the player appears jogging to the new line of scrimmage, typically 8 or more yards downfield.

TOSR: What kind of name is Jacquian?

JW: What? I don’t know, it’s just what my parents named me. I thought you wanted to talk about pass rush?

TOSR: Ok, ok. What do you experience when you rush the passer?

JW: It’s very spooky. I begin to rush. I see an offensive player, usually a lineman or back, and then, it all just kind of goes blank. There’s flashes of light, I see sky sometimes, or turf, I hear weird grunting noises. Then, nothing. The play is over and they’ve made another first down. I can’t really remember anything that happened.

TOSR: Nothing, never mind. Do you see a QB at any point during this process?

JW: I thought I saw one once. I can’t be sure. It was blurry.

TOSR: Can you show me on this doll where they blocked you?

JW: I think so. I like I said, it’s all sort of a blur. I don’t want to talk about it anymore.

TOSR: And, do you ever try and avoid these blocks? How do we know you’re really trying to get to the QB?

JW: What are you saying? That I’m ‘asking for it’ by the way I rush? That it didn’t really happen? Look, I don’t know what happens out there! It’s not my fault. IT’S NOT MY FAULT!

TOSR: Just one more question. Seriously, what kind of name is Jacquian? Do we pronounce the “i” or…

Looking to go more in depth, we caught up with Giants DC Perry Fewell to ask him more about this mystery. We asked him whether he had any insight into the disappearance of his pass rushing LBs. “We had veteran players. We run a sophisticated pass rush scheme. You have to take into account and communicate a lot out there — the down, distance, game clock, opponent tendencies, the QB, the personnel package, the field conditions, the strong side of the formation, wind speed, barometric pressure, biorhythms, astrological charts, whether there’s an ebb tide, polling results, electrical resistance, shear stress, the partial pressure of nitrogen, hydrostatic pressure, ovulation, market fluctuation, centripetal force, and charmed quarks.” We suggested that it seemed complex. He responded, “It is! It’s much harder than rocket science, it’s football. But, as a coach you simplify it for the players to help them understand. I have boiled it all down to easy to understand three point schemes for pass and run pressures.”

To validate this information, I got my hacker roommate who is part of the mysterious group known only as Anonymous — but whose name is Ed Tergarian, and he lives in his mom’s basement in West Caldwell — to hack Coach Fewell’s computer, and steal a copy of the defensive playbook. (Editor’s note: “password123” is not a secure password, Perry) In a TOSR exclusive, here for the first time is the Giants LB blitz package reproduced in its entirety. We ask you to PLEASE do not share this information for obvious reasons, to avoid giving away our strategies. Once this is published, our sources will leave for Russia like that NSA leaker guy. (Although, in this case, it’s just to pick up the mail-order bride. Welcome, Anastasia!)

NY Football Giants Pressure Packages for SAM, MIKE, and WILL

Run Blitz: Three-Step Plan
A) Synergy
B) Think Outside the Box
C) Empowerment!

That’s it. That’s the whole damn thing. Well, he definitely boiled it down. I see why they disappear now. I want to disappear now, too.

Tune in next week when we examine the Giants run blocking scheme. Spoiler alert: “Just kinda get in the way of someone if you can” could be in there! Until then, thank goodness it’s a bye week so we can pretend we’re fans of a functional football team. “They just look like the Broncos, but really that was the Giants. See? Manning is the QB.”