The Mayor was dumb, and the Council stood
As if they were changed into blocks of wood,
Unable to move a step, or cry
To the children merrily skipping by.
—Could only follow with the eye
That joyous crowd at the Piper’s back.
But how the Mayor was on the rack,
And the wretched Council’s bosoms beat,
As the Piper turned from the High Street
To where the Weser rolled its waters
Right in the way of their sons and daughters!
However he turned from South to West,
And to Koppelberg Hill his steps addressed,
And after him the children pressed;
Great was the joy in every breast.
“He never can cross that mighty top!
He’s forced to let the piping drop,
And we shall see our children stop!”
When, lo, as they reached the mountain-side,
A wondrous portal opened wide,
As if a cavern was suddenly hollowed;
And the Piper advanced and the children followed,
And when all were in to the very last,
The door in the mountain side shut fast.”

They’re back at Giants camp today, though!

Day 2 of camp, and it’s Autograph Day! The parking lot was nearly full a full hour before camp was supposed to start (though, the players are on the field a 1/2 hour early anyway).

The day starts off gloomy, sort of like reading the Book of Job, or reading Ralph Vacchiano. Speaking of Ralph, here’s his latest gem:

And it makes me wonder why they’re here, risking the lost time, when they have a beautiful indoor practice facility back at the Meadowlands.

Yes they do, Ralph. That nice indoor facility where only reporters and VIP’s can view the team practice.

Every year that the Giants have been in Albany, Ralph has complained about the team being here. The NY Press loves to invent reasons why the team will not come back, despite statements from the Owner (John Mara), the Coach (TC) and the Head of PR (Pat Hanlon).

I have a picture of the NY Press from today, when we had a bit of rain:

This team does not play in a dome, Ralph. This team is tough, like it’s coach, like it’s GM, like it’s Owner and the rest of the Front Office. They can go into Green Bay when the temperature feels like it’s 30 below and win.

They don’t bitch about where they play, or the conditions…that’s how you define a professional. And as we know, some of the press are professionals, and some aren’t.

On to what people want to hear about, though…the players!

Ok, today is not going to be a great weather day, it’s going to rain, so we come prepared (Giants umbrella, Large Coffee in our SB42 DD cup, Giants towel). Get to Dutch Quad parking lot, and it’s about full, so the attendance should be good today.

Practice is moved from the lower fields to the LaCross field (John Fallon Field), which is artificial turf, so the players should be safe. My feet are not, though, from all the walking around you have to do now, but that’s fine.

I pick a somewhat dry spot under a tree, behind the endzone (not the stands, which I should have gone to), but have to move out a bit to the right because of people standing in front of me. No problem!

The offense is on my end of the field, so I’ll be doing more with them this report. The QB’s are warming up; it looks like the first string today is Eli, Hynoski, Bradshaw, Bear, Cruz and Hixon, with the line (L-R) of Beatty, Boothe, Baas, Snee and Diehl. Second string has Carr at QB, with Cordle at center. Ryan Perrilloux at QB leads the 3rd string, with White at center, Randle at WR, and Wilson/Martinek at running back. TC runs people in and out, but on average you’ll see the same faces in the same string.

Horn sounds, and now the teams break up. The QB’s are on the sideline, working on center exchanges and shotgun snaps (Baas, Goodin, Boothe and White are the centers). On the main field, we start up with kickoff returns; the returners are Wilson, Randle and Jernigan. Jernigan looks much improved this year, he’s confident and attacks the ball, which is what good returners do.

Meanwhile, Nicks is chatting on the sideline with Corey and Antrel. I’m trying to figure out what they’re laughing about, so let me try my lip reading skills again (Caution, I’m not very good):

Ok, sprinting happens and the crowd goes wild! I go, “hey, better you than me!”

The pop up tackling dummies come out again. They look like this: 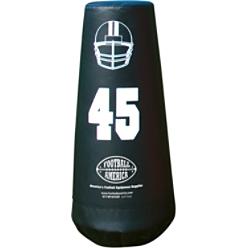 The staff lines them up in 2 rows of 3 across. Then players (first 2, then 3 at the same time) go around the first dummy in their row, then strike the second dummy as they go by it.

Meanwhile, Beckum, Sintim, Canty and Nicks are doing leg lifts in the back of the endzone. No bikes here.

Oh, the defense is dong the same rotation drills I mentioned yesterday.

Now it’s the WR’s concentrating on the pop up dummies. The QB’s are doing pitch and catch with the RB’s. The offensive line are doing stance drills on the sideline.

Speaking of the sideline, I see Tuck playing around with the “Ball on the Stick” (see yesterday’s report). Both Rogers and Bernard cast “lean and hungry look” when he does that (thanks, Bard!). Tuck then starts working on his golf swing with the Ball on the Stick. I hear rumbling in the background, but that’s probably Rogers stomach.

After a couple of handoffs (Eli to Bradshaw, Ryan to Wilson), the team splits up again. The QB’s are working on sprintout handoffs (technique is important here). The TE’s are using the Shield Pads (looks like a big seat cushion) to work on blocking techniques, and then work on ball safety (trying to knock the ball out of the other guy’s hands). The RB’s are working on ball safety drills with the balls that are attached to big rubber bands. The WR’s are working on catching the ball inbounds on sideline routes…the ball is aimed just before the sidelines, so you need to get your feet right to be in bounds.

Start to notice something? Ball safety and knocking the ball out of the other guy’s hands are be stressed on both sides of the ball.

The WR’s and DB’s now work 1 on 1 (both working on press coverage), while the QB’s are working on curl passes to the RB’s.

Now we have 2 QB’s tossing the ball, one short pass and one long pass. Cruz with a very nice sidelines catch that gets the crowd going. Jernigan with an nice fingertip catch. DePalma with a very nice over the shoulder catch. Bennett shows up with a nice smooth catch.

The Offense is going up against the Defense (no pads, though). Eli starts it off with a sack (not a real sack, they just call the play off when he can’t find someone open).

Eli with a play action to Jernigan on the left sideline…nice catch. Then handoff to Brown for an off tackle run. Dump-off to Hopkins up the middle.

Perrilloux comes in at QB, then hands off to Wilson for a right tackle run. Then handoff to Brown for a run up the left side. Wow, Wilson with a 2 cut run up the middle! This guy has quick feet! Perrilloux looks both ways, then throws the ball out of bounds. Overthrows Martinek, who was tightly covered. Martinek takes a handoff and races down the left side will a nice burst. Purvis drops a pass.

Hey a fake FG for a TD! (No, I won’t describe it…) The QB’s are working on corner flag passes from what looks like the 5 yd line. There’s a weird drill I haven’t seen before by the LB’s, where two LB’s are on either side of a guy in a 4 point stance with another guy behind him.

Eli to Hixon. 87 looks good, nice smooth catches. Cruz with a patented curl where he breaks it off and goes up the field. Just classic. Jernigan does a great job driving the CB back, then comes back to Eli for a catch. Wow, next play Jernigan with a nice over the shoulder catch over Corey…he shows wonderful extension (the pass by Eli is elite!). Short pass to Bradshaw, then Cruz with a nice move against Prince on the sidelines. I’m used to Barden leaping over people, but it’s nice to see him doing a sliding catch up the middle! Barden follows up with a nice leap and catch.

Carr time. Hill makes a spirited knock away of a pass to Cruz. Then Carr connects with Jernigan on a slant. His luck runs out as Randle is blanketed by the defense, so Carr then dumps off to Hopkins. Carr then throws a fastball too hot to handle to DePalma. Did Brown bump Robinson? Incomplete. On the next play Stanback makes a very nice catch over Brown.

Ryan’s Hoping to do better, so he’s in. Collins just misses making the play of the day, as he sky highs but just misses a fingertip catch. DePalma makes a catch on the right sideline. Janzen Jackson knocks down a pass to Douglas, then Wilson with a nice leaping grab on the right side.

Eli with a sack! Then hands off to Bradshaw on an off tackle left run. Ware with a nice burst off right tackle. Tuck on a zone blitz knocks down a pass to Hynoski. Bradshaw with a right off tackle run. Ware catches a right dump off pass. Prince gets revenge on Barden with a nice defense of a pass. Brown with a nice run from right to left.

Carr Time. Wilson AGAIN with a 2 cut run up the middle! Randle with a catch on the right. Wilson with a left tackle run. Brown takes a shotgun pass…was that a screen??? Wilson with another reception…this guy is quick. Sack. Wilson then takes a run up he middle.

Ryan Perrilloux again. Brown with a run up the middle, then right tackle the next play. Wilson catches a nice dump pass on the right. Ryan takes a sack, but Bennett waves his arms. (I was open!!!) Brown goes off tackle left.

Ugh. The rain, which had just about stopped, starts again. But practice continues!

Eli with another slot pass to Cruz. Bennett almost makes a spectacular one handed catch of a high pass on the right. He can sky! Bradshaw off tackle right.

Get the Carr out. INT by Herzlich on a right sideline pass. Mark was moving on that one! Wilson with an off tackle left run. Sack. Did Wilson just fumble?

Perrilloux is ready. Dump off to Martinek. Wilson’s back out there with an offtackle run left. Martinek with an off-tackle run right.

The team split up into groups, with a prayer group in the middle, the RB’s, O Line, D Line, WR’s, The staff moved short fences to one side of the field, then let the kids in. Autographs ensued!!!

And that’s it. The weather should be better tomorrow…hopefully, I’ll get to the lower fields!