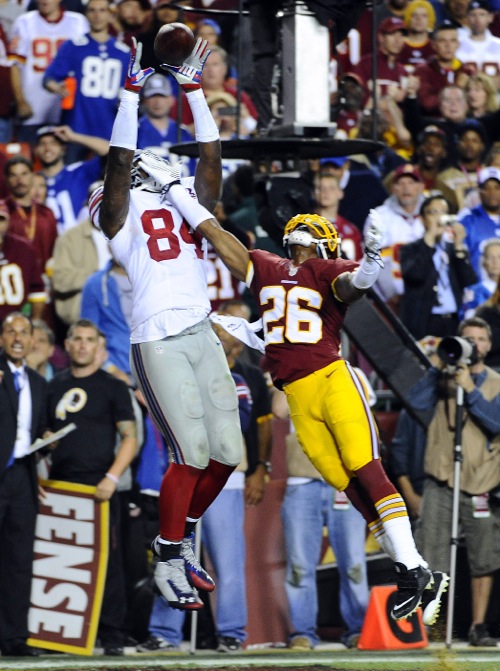 As the New York Giants entered training camp in July 2014, the tight end position appeared to be a pending disaster. The Giants had parted ways with the disappointing Brandon Myers and jack-of-all-trades, master-of-none Bear Pascoe. The only returning players were Larry Donnell (16 games, 3 catches in his two NFL seasons) and Adrien Robinson (3 games, no catches in his two seasons), both of whom had demonstrated very little to date. The Giants had only added Kellen Davis (unrestricted free agent from the Seahawks), Daniel Fells (who was out of football in 2013), and Xavier Grimble (undrafted rookie free agent). Late in training camp, the Giants also signed Jerome Cunningham (who was out of football in 2013).

The only tight ends drafted by the Giants in recent years were the disappointing Travis Beckham (2009 3rd round pick) and Robinson (2012 4th round pick). In free agency, the Giants let Kevin Boss walk in 2012 most likely due to a combination of salary cap and concussion concerns. His replacement Martellus Bennett was a good addition, but he departed in free agency the following offseason in 2013. Bennett’s replacement, Brandon Myers, was clearly a free agent mistake.

Exacerbating the legitimate concern about the lack of headline talent was the adoption by the Giants of new offensive system that would feature the tight end position. In a West Coast Offense, the tight end is a critically important component as a pass receiver. Mini-camp, OTA, and training camp reports confirmed that new Offensive Coordinator Ben McAdoo’s system would not only rely heavily on the tight end, but often employ two- and three-tight end formations. The fullback position was marginalized. And rather than use more three- and four-wide receiver sets, the multiple tight end packages were more prominent. It began took as if McAdoo would not adapt his system to the strengths and weaknesses of the given roster.

So pessimistic were many fans about the prospects for Donnell, Fells, and Robinson that they had penciled in Davis and Grimble as the two most likely to make the team. However, by late August, Davis and Grimble had been cut. Cunningham was cut too but then signed to the Practice Squad. Larry Donnell had won the starting tight end position, followed by #2 tight end Daniel Fells, and #3 tight end Adrien Robinson.

Overall, while the tight end was not a position of strength on the 2014 New York Giants, it certainly was not the mess many had expected. Donnell had a breakout year as a receiver. He finished tied for 9th in the NFL among tight ends in terms of catches (63), 13th in terms of yards (623), and tied for 7th in terms of touchdowns (6). Blocking was not a strength of his game, but Donnell appears to be an ascending player with enough physical talent to get better. Fells proved to be less dynamic, but was more reliable as a blocker. And he did chip in with four touchdowns. Robinson remained buried in last place on the depth chart, but at least he finally saw some playing time and caught his first NFL touchdown.

Larry Donnell went from a little-known player to the team’s primary tight end in 2014, playing in all 16 games with 12 starts. Donnell finished the season with 63 catches for 623 yards and six touchdowns. Donnell originally went undrafted and unsigned in 2011. The Giants signed him as a street free agent in March 2012 and Donnell spent 2012 on the team’s Practice Squad. Donnell made the 53-man roster in 2013 and was active for all 16 games, starting one contest. He finished the season with only three catches for 31 yards. Donnell combines very good size and overall athleticism. A very raw player when he came to the Giants, Donnell is still a work in progress. In the passing game, Donnell is a big target, adjusts well for the football, and is capable of making the circus catch. He needs to do a better job of holding onto the football (four fumbles in 2014) and gaining yards after the catch. While Donnell gives a good effort, he still has a lot of work to do to improve as a blocker.

Daniel Fells was the #2 tight end for the Giants in 2014. He played in all 16 games with nine starts and finished the season with 16 catches for 188 yards and four touchdowns. Fells was originally signed as an undrafted rookie free agent by the Atlanta Falcons after the 2006 NFL Draft. He has spent time with the Falcons, Raiders, Buccaneers, Rams, Broncos, and Patriots. The Giants signed Fells to a reserve/future contract in January 2014. Fells has good size and average athletic ability. He is a decent blocker. He does not really threaten defenses as a receiver, but he is reliable.

Adrien Robinson has not developed as hoped since being drafted in the 4th round of the 2012 NFL Draft by the Giants. In 2014, he was the team’s #3 tight end and played in all 16 games with one start. Robinson only caught five passes for 50 yards on one touchdown. In the previous two seasons, Robinson only played in three games and had no catches. He missed virtually all of the 2013 season with a foot injury he suffered in the preseason. Robinson has a good combination of size and athletic ability, but to date he has been unable to put it all together at the pro level as a blocker and receiver.

Jerome Cunningham was signed to the 53-man roster from the team’s Practice Squad in December 2014. Cunningham played college football at Southern Connecticut State University from 2009-2012, but he was not with an NFL team in training camp until August 2014 when the Giants signed him. He did try out with the Indianapolis Colts in May 2013 and Arizona Cardinals in May 2014, but was not signed by either team. Cunningham lacks ideal size for the position; he’s built more like an H-Back. But he is a good athlete who catches the ball well.