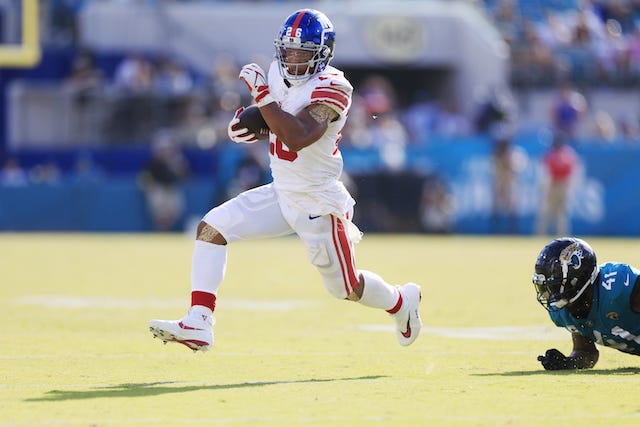 THE STORYLINE:
We’re nearing the midway point of the regular and the well-placed bye week for the New York Football Giants. And I suspect most fans of the team have the same thought in their head: let’s squeak out one more win, heal up during the bye, and get some reinforcements back for post-bye sprint to the finish.

This is turning out to be a completely unexpected and entertaining campaign. The Giants have been tied or behind their opponent in the 4th quarter in five of their six wins (and behind in four of them). Their six wins have been decided by 27 points. The oddsmakers have had them favored to lose almost every game this year. How are they 6-1? They are extremely well-coached. They are keeping games within two scores, and they are out-playing their opponents in the 4th quarter. Their resiliency and competitive endurance is off the charts. Thus far, there has been no emotional letdown despite the fact that every game was been an emotionally-draining nail-biter.

The NFC is not terribly impressive this year. There are only five teams in the conference who currently have a winning record. Unfortunately for New York, the NFC East has three of those five teams. And until proven otherwise in head-to-head match-ups, the Giants are still only the third-best team in their own division. The Eagles clearly appear to be the cream of the crop in the NFC. The Cowboys already beat the Giants once and get them at home again on Thanksgiving. The Giants will play five division games in their last seven contests. That’s where their fate will be determined.

One of the five teams in the NFC with a winning record is the also-surprising Seattle Seahawks, who are leading the disappointing NFC West with a 4-3 record. Seattle was supposed to be bringing up the rear in that division. Nevertheless, the other three teams all have three wins and things can change quickly. It’s quite possible that the Giants and Seahawks may be vying with each other for a final Wild Card playoff spot, making Sunday’s game much more important than it seemed when the schedule was first released.

NEW YORK GIANTS ON OFFENSE:
Before the Giants became a hopeless, ongoing joke from 2017-2021, long-time readers of this site should remember my tediously predictable approach to this team: it’s never as good as it seems when you’re winning; it’s never as bad as it seems when you are losing. I’ll charitably call it me playing Devil’s advocate. Get ready for a bit of Debbie-downerism.

The Giants are largely succeeding offensively with smoke and mirrors. A poster in The Forum pointed out this week that the Giants don’t have a player on their roster who has more than 200 yards receiving. I immediately thought that can’t be correct. Well it is. Richie James, who hasn’t caught more than 18 yards in a game in the last four contests, is leading the team with 191 receiving yards. The top pass-catcher is Saquon Barkley with 25 receptions. It’s 2022. Not 1940. These are historically-bad figures for a 6-1 team. And barring a trade that may be unwise for a still-rebuilding club, these numbers are not likely to get much better in the final 10 regular-season games unless Kenny Golladay has a massive turnaround.

In last week’s game preview, I wrote that it was not a coincidence that Daniel Jones threw his first 2-touchdown game since the opener in a contest where both Wan’Dale Robinson and Daniel Bellinger played together. The problem is the team just lost Bellinger for an unknown length of time. One can legitimately argue that the only healthy targets on this team who likely to be on the team next year are Robinson and Barkley. To be blunt, the New York Giants’ offense is not terribly difficult to defend at this point. No one is worrying about Darius Slayton, Richie James, David Sills, Marcus Johnson, Chris Myarick, and Tanner Hudson. They just aren’t. Hell, these guys sometimes “defend” themselves because they can’t catch the football.

So the Giants’ coaches are going to have to continue to desperately out-coach their opponents who are going to be completely focused on Barkley, and to a lesser extent Robinson. That’s a tough task. Remember, the Giants lost two starters on the offensive line last week as well. The early returns are that while Joshua Ezeudu may be an asset in the running game, he still has a lot to learn in pass protection. Tyre Phillips did a nice job at right tackle, but he is not Evan Neal.

Why am I being negative here? I’m just trying to prep the fanbase for the inevitable game where the offense can’t do just enough to pull out the victory. A thin team just got a lot thinner by losing Bellinger and two starters on the OL. Teams in the NFL can’t just play six or seven offensive linemen and just pound the football. That may work at the end of game when the other team has been worn down, but it won’t work for a full game. Plus, at some point, other teams are simply not going to keep falling for bootlegs by Daniel Jones.

Keep things in perspective. Recognize that despite the team’s superb record, it is still a weak roster that needs a big infusion of talent on the offensive side of the ball. Other teams have good players and excellent coaches. When adversity strikes, as it will, don’t start yelling and screaming that the coaches screwed up or ALL of the players suck. As JonC smartly posted this week, the Giants are playing with house money. Enjoy the season but be realistic about it.

The good news? Seattle is 29th in defense in terms of yards allowed (23rd in pass defense, 30th in run defense). They are 29th in scoring defense. If there was a team the Giants may be able to line up against and pound the football with some success, this is one of them. The weather also may be a factor with rain in the forecast. The Seahawks are also very young on that side of the ball, so misdirection and trickery may work. The Seahawks are bad on third down. They also give up big plays. When Seattle does blitz, their secondary has problems.

NEW YORK GIANTS ON DEFENSE:
Let’s start with the negative again and get that out of the way. I think most fans have picked up that I love Don Martindale. Heck, a few years back I wanted him to be our head coach. I think he’s done an excellent job with a unit that had a major question mark at one corner spot, has talent issues at inside linebacker, and has been hit hard by injuries (Azeez Ojulari, Leonard Williams, Aaron Robinson). However, I’m a bit shocked that the Giants have remained weak in run defense. It’s a weekly problem now and the Giants are currently 28th in run defense. Why this is so strange is that Wink’s defenses in Baltimore were always top tier against the run, even in his last year with the team. Other than the Dallas game, this hasn’t cost the Giants yet. But it will if they don’t get it fixed. They are also coming off a game where the defense gave up 450 yards of offense and had no sacks or tackles for losses.

Enter a Seattle team that is performing remarkably well on offense, 12th overall in yards and 5th overall in points. Pete Carroll was mocked when the team named Geno Smith the starter. Well Smith (107.8 rating) is vastly out-performing Russell Wilson (83.4 rating) who was traded to Denver. Smith, who was presumed to be merely back-up material, has thrown for 1,712 yards (7th in the NFL) and 11 touchdowns (tied for 6th in the NFL). He’s also thrown only three interceptions (though he has gotten a bit lucky in this department with some dropped picks).

Helping Smith is the fact that Seattle is also 10th in the NFL in rushing. The revelation has been rookie Kenneth Walker, who filled in when Rashaad Penny was lost for the year and is averaging over six yards per carry. In a limited number of carries (67), he has already broken off a number of big runs. The threat of the Seahawk running game allows Smith to use play-action effectively on first down. They have also done a good job of scoring early in games, putting teams in a hole early. Getting Seattle off of the field has been a problem on 3rd down as well.

Surprisingly, Seattle is having all of this offensive success despite two rookie tackles. Giants fans will note that Charles Cross, who was in play for the team in 1st round, is Seattle’s starting left tackle. Aside from the presence of a strong running game, Smith has benefitted from dangerous targets. Wideout D.K. Metcalf will likely miss this game due to a knee injury, but Tyler Lockett (41 catches, 468 yards, 2 touchdowns) and Marquise Goodwin (2 touchdowns against the Chargers last weekend) can get the job done. Both are fast. Seattle’s three tight ends have 56 catches and five touchdowns, with Will Dissly leading the way with three TDs.

The game plan here is obvious. Stop the run and make Geno Smith beat you with his arm. However, the Giants must remain disciplined on first down and not allow Seattle’s play-action game to lead to big chunks of yardage. The linebackers in particular will be on the spot, both in run defense and not being overly aggressive with the play-action. This is a game where the Giants need Tae Crowder and Jaylon Smith to play well. Wink also has to find a better solution to the team’s woes in run defense, or they will lose.

NEW YORK GIANTS ON SPECIAL TEAMS:
As I mentioned last week, the Giants’ special teams units are starting to find their rhythm and now are making plays to help the team win. Last week’s contribution was a blocked extra point. For a team that plays a style that keeps every contest close, these types of special teams contributions are invaluable.

FROM THE COACH’S MOUTH:
Don “Wink” Martindale on his defense giving up a lot yards: “I just know that we’re sixth in points and we play real well in the redzone. That’s the name of the game defensively is to try to keep them out of the endzone. We’ve done a good job doing that. I think each game, you look at it differently, so I’m not really worried about where we’re at statistically with that. I just want to know how many wins we have and how many losses we have.”

THE FINAL WORD:
In some ways, the win against the Jaguars was as impressive as the upset wins against the Titans, Packers, and Ravens. The Jaguars are a much better team than their record. They are well-coached. And they were desperate. The officials also put their hand on the scales of that game. It didn’t matter. The Giants still found a way to win.

I keep expecting reality to set in and the team to lose. The odds say they can’t keep this up. However, this Seattle team is probably not as good as its record. This is a game the Giants can win if they can somehow pull out another close game. Find a way to get to 7-1, got into the bye on a positive note, and get some reinforcements back.