Based on fan voting, the BigBlueInteractive.com (BBI) Giant of the Year Award award is given to the Giants’ player, coach, or member of the front office who most contributed to the team’s success on the field in a given year. The vote is held at the end of each season by members of the BBI community and the award is presented at a ceremony on the practice fields during training camp.

The award carries a special significance as the trophy has been re-named to honor Hope Johnson, a beloved member of the BBI community and organizer of the Giant of the Year Award presentation, who passed away in 2009. “I am extremely honored, I am overly ecstatic,” said Rolle. “I am fully aware of the site BBI, my family is. And I’m not too crazy about blogs, you have to a little on the edgy side. We thank you on behalf myself and the New York Giants for being such a great supporter… Win, lose, or draw, we know you guys are always there.” (YouTube Video of the BBI Trophy Presentation for Manning) “Hope Johnson, I knew she was a true fan,” said Seubert at the ceremony. “You guys on BBI are Giants fans. I think the reason why I wake up in the morning, I practice hard, I like to play hard is because the fans actually truly appreciate New York Giants football. ”

“New York Giant football fans know what they’re talking about. I can’t lie, every once in awhile you go on BBI, you take a look at what the fans are saying about you personally, about your teammates. If it was good stuff, you felt good about yourself. If it was bad stuff, it made you work harder. I just think every player wants the fans to like him. You want to work hard. You want to be able to show your support to the fans for playing hard and all of that good stuff. We want to win. You guys want to win. New York Football Giants want to win football games.”

“You never play the game for work, you play the game because you love it. I’m honored to have it with Hope Johnson’s name on it. I knew she was a Giants fan and it’s going to go in a special place in my house.”

(YouTube Video of the BBI Trophy Presentation for Seubert) 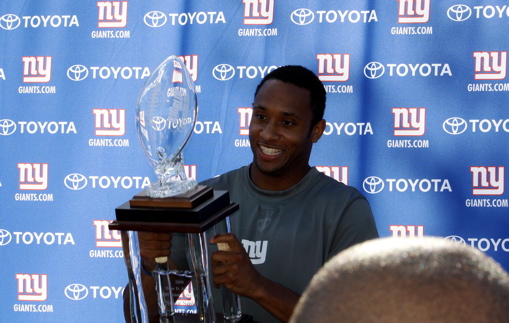 “In our game, individual recognition is the result of teamwork,” said Smith in a statement released in April 2010. “I am humbled that BBI has chosen me as its Giant of the Year, but I wouldn’t even be a candidate if it weren’t for our entire offense, especially Eli. So I am thankful, and I am honored to be the first recipient after the award has been re-named in the memory of Hope, whose spirit and passion for the Giants embodied what being a Giants fan and being a member of BBI is all about. Hope was a great ambassador for the Giants, and it’s fitting this award should be in her name.”

(YouTube Video of the BBI Trophy Presentation for Smith) (YouTube Video of the BBI Trophy Presentation for Jacobs) (YouTube Video of the BBI Trophy Presentation for Burress)