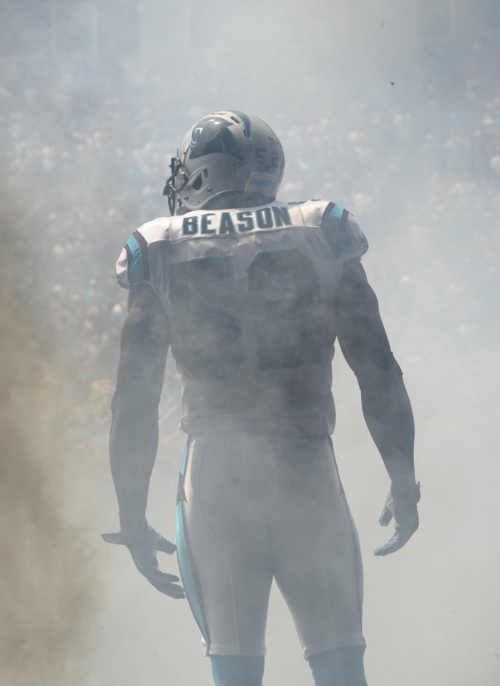 LB Jon Beason Traded to New York Giants: The New York Giants have acquired LB Jon Beason from the Carolina Panthers by trade in exchange for a “late-round” draft pick in the 2014 NFL Draft. Beason, who was drafted in the 1st round of the 2007 NFL Draft by the Panthers and who has played in three Pro Bowls (2008-10), has had his career sidetracked with serious season-ending injuries in 2011 (ruptured left Achilles tendon) and 2012 (right ACL tear that required microfracture knee surgery). The Panthers benched him two weeks ago for ex-Giant Chase Blackburn.

This is the Giants’ first in-season trade since they traded for RB Ottis Anderson from the St. Louis Cardinals in 1986.

“It’s amazing,” said Beason after passing the Giants’ physical. “It doesn’t happen (often) with mid-season trades. But the one place I said if I wasn’t in Carolina where I wanted to be was with a great organization like the Giants with a winning tradition, leadership, a 4-3 scheme where I can come in right now. I think I can really come out and impact the season.

“I know I’ll come in tomorrow early and meet the coaches and I’ll get my linebacker coach (Jim Herrmann) and we’re going to cram. If they ask me to, I’ll dress (Sunday) and I’ll give everything I have…It’s just going to be terminology. I’m a smart player. I learn fast. Being a mike linebacker, a lot is on your plate. I think I actually thrive in that position. I’m going to get with coach as long as it takes and as fast as I can get it as soon as I want to play.”

The Giants play the Eagles on Sunday but also have a short week after that, playing the Bears on Thursday night.

“The turnaround is the tough part,” said Beason. “Those Thursday night games are always hard. We’ll see what Coach (Tom) Coughlin has and whatever he says that’s what I’ll do.”

Beason thought the Giants might have drafted him in the first round of the 2007 NFL Draft, but the Giants selected CB Aaron Ross instead.

“(The Giants) were one of the teams that brought me in and I knew they were high on me and I thought they were going to take me, but you know the draft,” Beason said.

“It’s hard (missing so many games the last two seasons), but you understand that it’s a process and you have to go through it and then once you come to grasps with it that you know you can’t do anything about it. You might as well say, ‘Let’s get the surgery done’ and now every day is building toward getting back out there and playing football. The injuries have been a problem, but I wouldn’t change one thing because I know they’re not going to define me.”

“I’ve always been able to play through things, but clearly I couldn’t,” said Snee. “The best thing is for me to watch my team play and try to get my hip right…I’ve prided myself in playing through things and…I just can’t.”

Snee was asked if the injury might be career-ending. “That’s not something I’m thinking about right now,” replied Snee. “I’m honestly just trying to get over the frustration of this and deal with surgery and deal with rehab. I’ll think about that later.”

“I’ve always been a guy that by Friday could suit up and play,” said Snee. “I was kind of secretly hoping I’d wake up and things would feel differently, I would respond to the treatment and the medicine. It just didn’t happen. It’s frustrating. It’s just a new situation for me. I’ve always been able to play through things. Sometimes things nobody knew about, things that I kept to myself, but I had to be honest with everyone because it really got to the point where I was doing no good, to be honest.”

Injury Update – Giants Down Three Corners: Not practicing on Friday were DT Linval Joseph (ankle/knee), CB Corey Webster (hip), CB Aaron Ross (back), CB Jayron Hosley (hamstring), OC David Baas (neck), and TE Adrien Robinson (foot). Of this group, Webster is “doubtful” for the game on Sunday against the Philadelphia Eagles and the rest will not play.

Article on the New York Giants and Linebackers: Giants GM Just Can’t Find a Fix at Linebacker by Paul Schwartz of The New York Post

Article on Head Coach Tom Coughlin: Trust in Tom Coughlin to Save Season by Ian O’Connor of ESPNNewYork.com

Article on RB David Wilson: David Wilson Ready to Flip the Script and Score for First Time This Season by Tom Rock of Newsday

Article on WR Hakeem Nicks: Struggling Hakeem Nicks Could Learn a Lot from Victor Cruz by Bob Glauber of Newsday