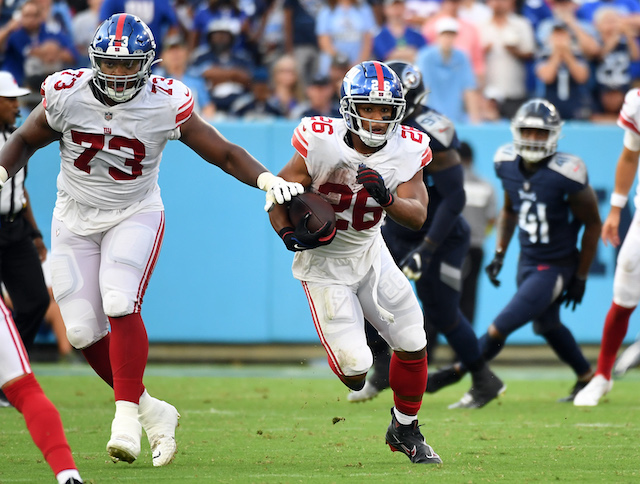 NEW YORK GIANTS 21 – TENNESSEE TITANS 20…
The New York Giants pulled off a stunning upset in their opening game of the 2022 NFL season by defeating the Tennessee Titans 21-20 at Nissan Stadium in Nashville, Tennessee on Sunday afternoon. The win was New York’s first victory in their opener since 2016.

The overall team stats were as even as the final score. Both teams picked 19 first downs. The Giants held a slight advantage in total net yards (394 to 359). However, the Giants dramatically out-rushed the Titans 238 yards to 93, while the Titans held a clear advantage in net passing yards (266 to 156). Both teams had issues with 3rd-down conversions (2-of-10 for the Giants and 3-of-11 for the Titans).

The first half was pretty much all Tennessee and the Giants were fortunate that the scored was only 13-0 at halftime. The Giants’ six first-half possessions only resulted 27 offensive snaps for 131 yards, seven first downs, four punts, one turnover off a fumble by quarterback Daniel Jones, and time expiring on the final drive.

Meanwhile, The Titans scored a touchdown on their first possession after a quick three-and-out by New York, followed by 46-yard punt return. It only took five plays for the Titans to easily move the remaining 45 yards as quarterback Ryan Tannehill threw a 7-yard touchdown pass. The Giants’ defense forced a three-and-out on Tennessee’s second possession, but the Titans did manage a 10-play, 65-yard drive and a 7-play, 37-yard drive that both resulted in field goals.

Tennessee received the ball to start the second half, but the New York defense forced a quick three-and-out. On the Giants’ first offensive snap of the second half, running back Saquon Barkley broke off a 68-yard run down the left sideline. After two carries for 13 yards by running back Matt Breida, Barkley ran four yards for the touchdown. However, the extra-point attempt failed. Titans 13 – Giants 6.

New York’s defense forced its second straight three-and-out of the half. After Barkley lost one yard, Jones threw a deep pass to wide receiver Sterling Shepard, who broke a tackle and raced into the end zone, completing a 65-yard play. In a little over two minutes, the game was now tied at 13-13.

However, the Titans regained momentum on their third possession by driving 75 yards in nine plays. Tannehill threw a 23-yard touchdown to running back Dontrell Hilliard. Tennessee was now up 20-13 with just under three minutes to go in the third quarter.

Both teams exchanged three-and-outs and punts. The Giants were forced to punt yet again, but immediately got the ball back when the Titans’ returner muffed the punt. Safety Jason Pinnock recovered the ball for New York at the Tennessee 11-yard line. This golden opportunity was lost when Jones threw an ill-advised pass that was intercepted in the end zone on 3rd-and-7.

The Titans picked up one first down but were forced to punt with about five and a half minutes to play. On the ensuing possession, the Giants drove 73 yards in 12 plays. During this game-winning drive, Barkley broke off a 33-yard run, fortunately fumbling out-of-bounds. Four plays later, Jones picked up a first down on 4th-and-1 on a bootleg to the left. Barkley gained 14 yards on three straight runs and Jones then threw a 1-yard touchdown pass to tight end Chris Myarick with 1:06 left on the clock. Eschewing the tie, Head Coach Brian Daboll went for the risky two-point conversion, knowing that if it failed, his team would lose. The play succeeded with a shovel pass to Barkley. Giants 21 – Titans 20.

The game was not over, however. Starting at their own 30-yard line, Tennessee converted on two 3rd-and-4 situations via defensive holding penalties to cross midfield with 23 seconds left. Apparent disaster struck when Tannehill then completed a 21-yard play to the New York 27-yard line with 18 seconds left. Tannehill lost two yards before spiking the ball to stop the clock with four seconds left.

The Giants escaped with the victory when Titans’ place kicker Randy Bullock missed the 47-yard game-winning attempt as time expired.

Jones finished the game 17-of-21 for 188 yards, two touchdowns, and one interception. Barkley carried the ball 18 times for 164 yards (9.1 yards per carry) and one touchdown. He also was the team’s leading receiver with six catches for 30 yards.

Defensively, All-Star running back Derrick Henry was held to 82 yards on 21 carries (3.9 yards per carry). Linebacker Tomon Fox had the team’s only sack.

POST-GAME REACTION…
Transcripts and video clips of post-game media sessions with Head Coach Brian Daboll and the following players are available at Giants.com:

GIANTS LOSE OFFENSIVE LINEMAN TO CARDINALS…
On Saturday, the Arizona Cardinals signed offensive lineman Max Garcia off of the New York Giants’ Practice Squad. The Giants signed Garcia as an unrestricted free agent from the Arizona Cardinals in March 2022. The 6’4”, 309-pound Garcia was originally drafted in the 4th round of the 2015 NFL Draft by the Denver Broncos. The Cardinals signed him as an unrestricted free agent in March 2019. Garcia has played in 93 regular-season games with 52 starts. In 2021, he started 11-of-15 games for the Cardinals.