Perry Fewell Joins Redskins as Defensive Backs Coach: Perry Fewell, the former defensive coordinator of the New York Giants who was fired by the team on January 7th, has joined the Washington Redskins as their new defensive backs coach. Ironically, Fewell replaces Raheem Morris, who interviewed with the Giants for the defensive coordinator vacancy before the Giants hired Steve Spagnuolo.

Fewell had also interviewed with the San Francisco 49ers, who reportedly offered him a position as their defensive backs coach.

Article on WR Victor Cruz: Should the Giants try to do something about Victor Cruz’s contract? by Dan Graziano of ESPN.com According to Newsday and The New York Daily News, New York Giants Defensive Coordinator Perry Fewell and Special Teams Coordinator Tom Quinn will likely retain their positions with the team for the 2015 NFL season.

An unidentified source told Newsday that “it appears everyone on the coaching staff is coming back.”

Newsday is reporting that Head Coach Tom Coughlin is “still evaluating, and some changes may still take place at the position or assistant level. But the big decisions regarding the coordinators seem to have been reached.”

Meanwhile, The New York Daily News says two sources have told the paper “it appears (Fewell and Quinn) are coming back.” Like Newsday, The Daily News is reporting that any coaching staff changes will not likely involve the coordinators.

Interestingly, however, The Daily News is also reporting:

According to one team source, in Coughlin’s meetings last week with GM Jerry Reese, co-owner John Mara and others in the organization, the idea of firing Fewell came up and some in management wanted that to happen. Some in the organization had held out hope that Coughlin would turn back to Steve Spagnuolo, his defensive coordinator in 2007-08, who is now the defensive backs coach for the Baltimore Ravens.

Fewell’s defenses have ranked near the bottom of the NFL three of the past four seasons (29th in 2014) and Quinn’s special teams units have been far from special for years.

To date, the only changes to the coaching staff have involved the quarterbacks coach position. Danny Langsdorf, who joined the Giants in January 2014, is returning to the collegiate ranks to become the University of Nebraska’s offensive coordinator. He is being replaced by Mike Sullivan, who was the team’s quarterback coach in 2010-11. Jerry Reese and Tom Coughlin to Return, But Some Assistants Might Not: According to The New York Daily News and The New York Post, Jerry Reese will not be fired by team ownership and will return as general manager of the New York Giants for the 9th season.

In addition, according to ESPN, The Bergen Record, and The New York Post, Tom Coughlin will not be fired and will return as head coach of the Giants for the 12th season. ESPN is also reporting that Coughlin will meet with team President/CEO John Mara at 3:00PM on Monday to discuss potential coaching staff changes.

Article on Defensive Coordinator Perry Fewell: Perry Fewell’s status with the Giants uncertain, but players show support for the defensive coordinator by Nick Powell for NJ.com

Article on QB Eli Manning: Giants’ Eli Manning wants to improve timing with his receivers in second year of new offense by Nick Powell for NJ.com

Article on OT Justin Pugh: Justin Pugh wants to stay at right tackle for Giants by Tom Rock of Newsday

Article on the New York Giants Cornerbacks: Giants defensive backs want a chance to gel…and be healthy by Tom Rock of Newsday December 26, 2014 New York Giants Injury Report: LB Devon Kennard (toe) did not practice on Friday. He has officially been ruled out of the regular-season finale against the Philadelphia Eagles on Sunday.

Giants.com Q&A with Head Coach Tom Coughlin: The Coughlin Corner: Every game is critical by Michael Eisen of Giants.com

Article on the New York Giants and Penalties: For the Giants, fewer penalties don’t equal more wins by Nick Powell for NJ.com

Giants Online – Giants vs. Eagles Preview: The video of this week’s Giants Online is available at Giants.com.

Article on LB Devon Kennard: Devon Kennard’s future appears to be at outside linebacker by Jordan Raanan for NJ.com

Article on the New York Giants Special Teams: What an astonishing stat shows about two NFL opposite coaches by Paul Schwartz of The New York Post

Article on the New York Giants and the 2015 NFL Draft: Mulling The Giants Potential 2015 Draft Targets by Curt Macysyn for CBS New York

Article on Former Giant OG Chris Snee: For the Good of the Family, if Not the Giants by Bill Pennington of The New York Times

QB Eli Manning (back) practiced officially on a limited basis.

“Eli practiced well and did everything,” said Head Coach Tom Coughlin. “There wasn’t any real restriction on him, so we feel good about that.”

Article on QB Eli Manning: Eli Manning and the value of perfect attendance by Dan Graziano of ESPN.com

Article on the New York Giants Defense: Kennard, Hankins Are The Building Blocks Of 2015 Giants Defense by Curt Macysyn for CBS New York

Article on the Giants-Titans Game: What the Giants rookies did in Tennessee to impress | Film review by Jordan Raanan for NJ.com

Giants Online – Giants vs. Redskins Preview: The video of this week’s Giants Online is available at Giants.com. 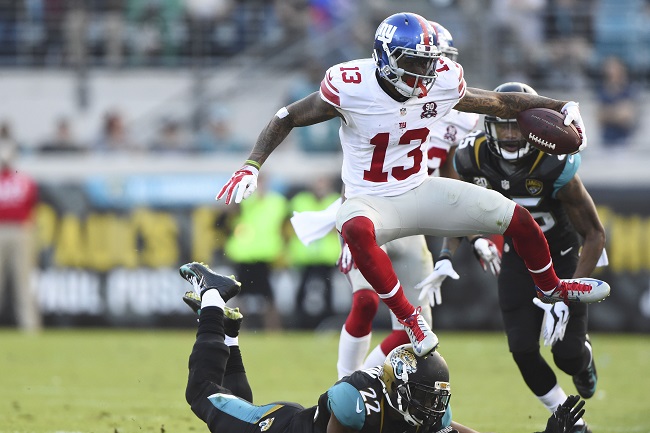