Hey, Boys and Girls, what day is it?

Mike has blessed the University at Albany with his presence. No sign of his biggest fan, though (Phil Mushnick). He did interview a bunch of Giants, including John Mara, Tom Coughlin, Justin Tuck (I was there for that, but had to leave), Victor Cruz and Eli Manning. Here’s Eric’s link to those interviews.

Oh, and he promised to go off on the Jets, tomorrow (he did do a bit of that at the end of his show today). The last time he did that, it was a classic!

Just a great day for practice. Temps between 75 and 81 degrees, Dew Point 58, Humidity 56%, and a mild wind out of the West South West at 3 mph. I’m coming from Wolf Road (attended a Vmware seminar at the Marriott), so I’m ready for real excitement! Hop in the Accord, and let’s roll!

I get a shady spot behind the fence on the hill, between Field 2 and Field 3. The players are starting to wander in, with the first one be Marcellus Bennett. Prince walks down the hill with a helmet, so he’s gonna go today!

The camera towers are on Field 3, so that’s the main field, though the cameras are at the other end of that field, nearer to Western Avenue.

The Offense jogs over to Field 4, and runs plays.

Field 3: The D Linemen are working with the upside down garbage cans (5 of them, which represent O Linemen) and work on pass rush lanes.

Field 3: The Defensive Backs are working on cover drills.

Field 2: The QB’s are working on getting shotgun passes and center exchanges with Bass, Boothe and Goodin.

All of them are fine catching the ball, including Douglas.

Field 3: There are two lines made up of DB’s, LB’s and WR’s. They are doing “gunner” practice, for the outside runners and defenders for that particular special team assignment.

Field 5: The QB’s pitch and catch with Bradshaw, Cruz, Bear, and Bennett.

Field 4: The D Line is circled around the coaches, soaking in instruction and Gatorade.

The Offense migrates over to Field 4, and runs plays.

Field 3: The safeties, CB’s and D linemen split into three groups, each of which has a bunch of guys in a circle. They are doing “Football Pepper!” (Well, it looks like pepper.)

Now, for you young guys, Pepper was an old Baseball game where you had players form a circle, and toss the baseball around…if you couldn’t make a catch, or if you made a bad toss, you were out! Same thing here, but with a football!

You could hear the coaches yell “Keep it going, keep it going!” quicker and quicker. The players are really having fun with this one, lots of chatter!

Field 3: Two groups, one the safeties, the other cornerbacks. Each of them is doing the “fumble drill”, where the coach stands back 10 yards, then tosses the football down on the ground. One player at a time dives for the spinning football!

Field 5: The players who are not officially in practice are trying to keep loose. Jacquian Williams, JoJo Nicolas, Hakeeem Nicks, Canty and Scott (the last two were on the “Tour de Albany”…this time, they only have THREE bikes! A hint, maybe?”

Field 4: The TE’s, WR’s and RB’s are doing “run the gauntlet” ball safety drills; here, the players are hit with foam arm shields as they go through the gauntlet.

Here’s a picture of the Redskins doing this drill: 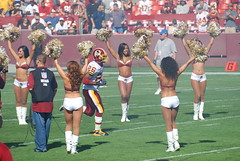 The QB’s, meanwhile, are doing more limbering up doing pitch and catch.

The LB’s and D Line are also doing fumble drills, as noted above.

Field 5: The O Line are working on blocking, with one O Lineman opposing another with a foam arm shield.

Field 3: The safeties are working on how to position themselves when a WR runs right at them…it’s a balance drill, so that they can break right or left without falling.

Field 4: LB’s working on covering TE’s on pass patterns, usually a drag over the middle route.

CB’s are working on covering out’s (left and right) while the coach throws the ball.

Field 4: Two groups, the DT’s and DE’s are working on stance and technique drills.

Field 5: The RB’s have a drill where one RB runs short, then passes to another RB streaking by them. The other RB then throws back to the line of RB’s, so this drill is being run at a fast pace.

Field 5: Nicks is running for short bursts and turning around to catch a pass from one of the coaches!!! It’s only for a short period, but that’s the first I’ve seen him attempt a pass reception.

Field 4: Linebackers ward off a guy with foam wrapped around his arms trying to hit them as they go around him.

Field 3: QB’s working on throwing to TE’s/WR’s covered by CB’s on short end zone passes. Larry Donnell with a nice grab and run.

Eli: Hixon with a catch on a drag middle route against Prince. Hixon then pushes Bruce Johnson to the ground, but no catch. Bradshaw takes a handoff off tackle right. Interception.

Perrilloux: Wilson off tackle right no gain. Wilson up the middle no gain. Collins can’t handle a hot pass, and drops it.

Field 2: DeOssie, Weatherford and Tynes work on FG drills, with DeOssie doing long snaps to Weatherford, who waits for Tynes to kick. They do different distances and angles, and are generally successful.

Eli: Play-action sprint left pass to Hixon, but the pass is too low, and Hixon traps it. Hixon comes back with a catch on the left flat. Jernigan snags a middle dink. Barden engulfs a pass in the left flat over Tryon. Donnell catches one up the middle.

Carr: Brown gets a dink up the middle, then Wilson runs up the middle. Carr’s in a shotgun, sprints right and tries to hit Stanback, but he’s not open so Carr throws it away.

Carr: Jernigan catches one vs Coe on the left sideline. Brown is stuffed on an off tackle right run by Hendricks, who looks better after yesterday’s scare. Carr sprints left to float one to Randle in the left flat. Herzlich stuffs Wilson on a middle run.

Perrilloux: Sack (no one open). Brown off tackle right after a direct snap. Talley drops a LONG post when the ball goes over the wrong shoulder, defended by Bing.

Field 2: Hey, Eli is rushing Carr! Yes, it’s the “one QB rushes the other, holds his hands up, and the QB with the ball throws to #80 drill.”

Eli: Bear with a nice leap and catch over Rivers. Hixon catches one in a gap in the zone on the right sideline. Bradshaw catches one in the left flat.

(Hey, is Tebow stealing Giant QB uniforms for the next set of passes?)

Carr: Overthrows Stanback with a low pass on the right sideline. Overthrows DePalma on a long left sideline pass.

Perrilloux: Wilson drops an easy pass in the left flat. Brown stumbles and falls trying to get a right flat pass, incomplete. Stanback can’t catch a McNabb grounder special up the middle. Brown can’t make a fingertip catch on a pass to the right sideline. 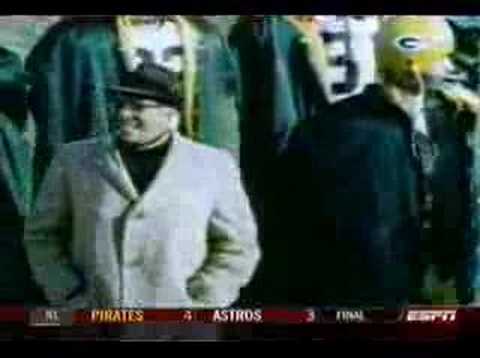 What the Hell is going on here??

Perrilloux: PLAY OF THE DAY! A 40 yard post to DePalma!

Eli: Left out to Bennett. Eli runs a sprint right, then turns around to float a pass to the left, only Osi snags it and returns it for a TD! The crowd goes wild!

Eli: Bradshaw off tackle right. Bennett takes a screen right and makes a nice gain out of it. Ware up the middle. Robinson splits the zone on a right slant.

Carr: Jerningan with an end around. Wilson drops a pass in the left flat. Brown runs up the middle. Robinson with a left screen. Carr’s in the shotgun, sprints right and hits Randle on the right sideline. Collins with an end around.

Perrilloux: Martinek runs up the middle. Collins on the left sideline can’t reach a high pass. Martinek off tackle left. Wilson with a slant post catch..and he’s gone, just like that! Jones tips a pass that falls incomplete. Wilson off tackle right.

The next series looks like Green Zone drills with 11 on 11, but the players stand in front of me, blocking my view, so I’ll leave that to Marty.

The offense turns around, so I can now see them.

Eli: Shotgun pass to Bennett up the middle. Handoff to Bradshaw up the middle. Bradshaw with a pass reception on the right sideline. Cruz on a right curl catch. Timeout. Herzlich goes over Cruz’s back, causing an incomplete. Barden with a catch vs Johnson on the left sideline.

Then Cruz runs a post, and takes the ball out of Bennett’s hands in the end zone for a TD to end practice!

Coughlin spends a lot of time with the whole team around him in a circle.

The Defensive Backs go to Field 4 to hit the single man sled.

The TE’s are playing pitch and catch.

Snee and Petrus are hitting a single man sled on the other side of Field 4.

Molden is working with Talley on getting off the line of scrimmage.

Tracy is talking with coaches about technique.

Tuck is wearing an “Our Time is Now” t-shirt as Francessa interviews him.