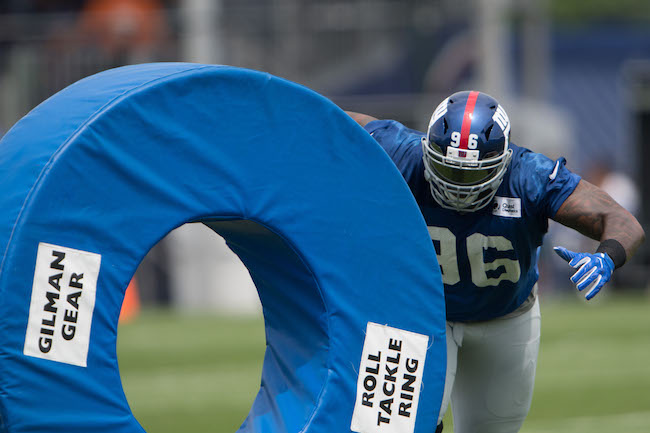 JADAR JOHNSON RETIRES…
The New York Giants announced on Sunday that undrafted rookie free agent safety Jadar Johnson (University of Clemson) has left training camp and decided to retire from the NFL. Johnson did not practice on Saturday as Head Coach Ben McAdoo said he was “ill.”

“After seriously weighing his options, Jadar has decided to retire from football today to pursue other interests,” said Johnson’s agent. “This was not an easy decision for him to make, but it is the right decision for him. He has new ventures that he wants to pursue and he values his health. Jadar is very grateful to the Giants’ organization for the opportunity they provided him.”

“I had a conversation with him, a personal conversation,” said Head Coach Ben McAdoo. “They released a statement, he and his agent, and we’ll leave it at that.”

BALTIMORE RAVENS SIGN LARRY DONNELL…
The Baltimore Ravens have signed New York Giants unrestricted free agent Larry Donnell. The Giants had no interest in re-signing Donnell, who began the 2016 season as the starting tight end but was benched after the bye week. He started to receive more playing time again late in the season. Donnell ended up playing in 14 games with six starts, and finished the regular season with just 15 catches for 92 yards (6.1 yards per catch) and one touchdown. Donnell originally went undrafted and unsigned in 2011. The Giants signed him as a street free agent in March 2012 and Donnell spent the 2012 season on the team’s Practice Squad. Donnell has regressed since his breakout 2014 season (63 catches for 623 yards and six touchdowns). His numbers were down in 2015 (missing half the season with a neck injury) and down again in 2016.

Running back Shane Vereen left practice early with a “lower body” injury. “He was sore and we were smart and held him,” said Head Coach Ben McAdoo. “He could’ve gone back in, but we decided to hold him.”

SY’56 PRACTICE REPORT…
Picture Perfect day. 80 and sunny with no humidity. Very comfortable with no breeze. Another day of “full speed” 7-on-7 and 11-on-11 drills where the guys got to compete. For obvious reasons, the defense holds back a tad in congested situations but for the most part, we got to see these guys fight it out.

I wanted to get some more attention on the defense today…but also got to see kicker Aldrick Rosas get four attempts in. Distance isn’t exact, but they were all roughly 30-40 yards I believe. We got to speak to him after practice as well, nice kid, very relaxed and calm. Laid back. A few interesting notes about him…he played in a National Championship Game (NAIA) for Southern Oregon in 2014. Tore his ACL in that game and even with two years left of eligibility, he turned pro. He spent the 2016 preseason with Tennessee and lost out to veteran Ryan Succop. NYG signed him in January and as of now, he is the lone kicker on the roster.

In addition, below is the video link to our surface level notes, interview with kicker Aldrick Rosas, and clips from practice! We were missing a mic, so we had to pass the one back and forth…sorry for the crackling.

Even Engram with the TD and more top plays from #GiantsCamp practice! pic.twitter.com/IcZtpTLMCe

WHAT’S UP NEXT…
The fourth training camp practice will be held on Tuesday, starting at 10:55AM. The training camp schedule is available at Giants.com.