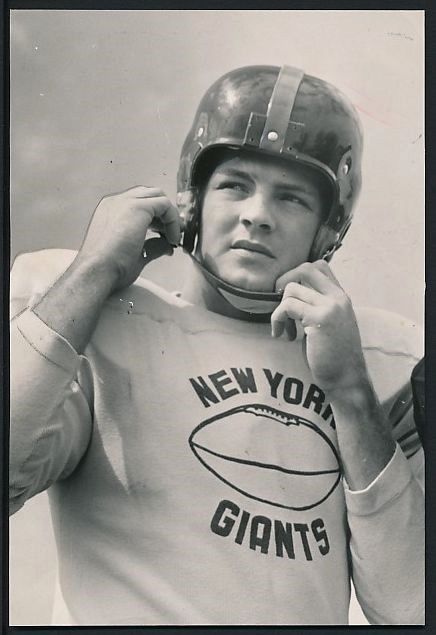 Frank Gifford, an All-Pro and Pro Football Hall of Fame enshrinee, who spent all of his 12-year NFL career with the New York Football Giants during their golden era, passed away at his home in Connecticut at the age of 84.

The multi-talented Gifford was selected by New York with their first pick (11th overall) in the 1952 NFL Draft following a successful career at USC where he had been the Trojans’ starting tailback in 1951. Giants Head Coach Steve Owen preferred having his better athletes take the field on defense and played Gifford at defensive halfback. Despite his desire to play offense, Gifford played well enough on the defensive side of the football to earn Pro Bowl honors his rookie season.

In 1953, New York’s roster was decimated by injuries. By the second half of the season, Gifford was averaging approximately 50 minutes per game. In addition to defense, Gifford played offensive halfback, returned punts, place kicked, and covered kickoffs. At the end of the season his body was battered and he contemplated retirement. A regime change gave him a new outlook.

When Gifford reported to training camp in 1954, he was greeted by new head coach Jim Lee Howell’s offensive assistant. Gifford recalled the initial meeting in his autobiography The Whole Ten Yards: “He spotted me, walked over, and stuck out his hand. ‘Hiya,’ he said. ‘I’m Vince Lombardi.’ Then he uttered three words that changed the rest of my life. ‘You’re my halfback.’”

Lombardi moved the Giants offense into the modern era and beyond and made a star of Gifford as television audiences grew and the public noticed. Gifford was the feature element of New York’s bread-and-butter play: 49 Power Sweep. This sweep offered Gifford a tantalizing option, the ability to throw the ball downfield as he followed two pulling guards to the edge. If the defensive halfback stayed with the receiver, Gifford continued with the rush; if he stepped up to defend the run, Gifford pulled up and threw deep. Over his career Gifford completed 29-of-63 passes for 823 yards and 14 touchdowns with six interceptions. Through the five seasons spanning from 1955 through 1959, Gifford led the Giants in both rushing and receiving every year. The 1956 season was Gifford’s personal best, rushing for 819 yards and catching 51 passes for 603 yards in a 12-game season, helping the Giants become NFL Champions. His 1,422 total yards from scrimmage led the NFL. Gifford was awarded the NFL’s “Most Valuable Player Award” after the regular season and capped off the campaign by scoring a touchdown in the Giants 47-7 romp over the Chicago Bears in the NFL Championship Game.

Gifford played in three more Championship Games with the Giants. Despite all being losses, Gifford’s star continued to rise. Gifford performed with style, making his on-field feats look easy and he was even smoother off it. If Mel Hein was the Football Giants Lou Gehrig, then Gifford was their Joe DiMaggio. Gifford remained humble amidst the star treatment, and was always complimentary of the opposition and shared praise with his teammates. He often credited his blockers as a halfback (especially tackle Roosevelt Brown and fullback Mel Tripplett) and said Del Shofner made it easy for him as a receiver by drawing away coverage.

Gifford had his own locker room radio show after games and hosted the sports segment on the local news during the offseason, while also having bit parts in Hollywood movies. He added five more Pro Bowls to his resume and was named first-team All Pro four times. A thunderous collision with Philadelphia’s Hall of Fame linebacker Chuck Bednarick in 1960 nearly ended his career with a spinal concussion. After sitting out the 1961 season, Gifford attempted to defy the odds and return at a new position. A new coaching regime arrived in 1961 with Allie Sherman as the head coach and Y.A. Tittle as the quarterback. Gifford made the transition to flanker where he would be subjected to fewer violent hits, much like his teammate Kyle Rote had done after several injury-plagued seasons. After a slow start to the 1962 season, Gifford became acclimated to his new role and built chemistry with his quarterback. His 39 catches were third on the team and his 796 receiving yards were second (averaging over 20 yards per catch). He was named the “NFL’s Comeback Player of the Year.” His 1963 season was just as good and Gifford played in his eighth Pro Bowl at his third position. He is still the only player to have done so.

Gifford retired after the 1964 season. At that time, his 3,609 rushing yards and 367 receptions were both second in team history, and his 5,434 receiving yards were first. Gifford’s 78 total touchdowns remain the team standard to this day, and his total points scored of 484 (which includes two field goals and 10 point-afters) ranks fourth. His 14 touchdown passes are the most by a non-quarterback in NFL history.

Gifford then embarked on a second career that may have eclipsed his football success. He served as a color commentator for CBS’s coverage of NFL games from 1965 through 1970, and was in the booth for the full broadcast of the first NFL-AFL Championship Game on January 15, 1967. Gifford took over as the play-by-play announcer for ABC’s Monday Night Football broadcasts in 1971. Monday Night Football became a major prime time event during the mid-to-late 1970’s, taking on a life of its own with its circus-like atmosphere. Gifford was at its epicenter as he shared the booth with the cantankerous Howard Cosell and easy-going Don Meredith. Gifford was inducted into the Pro Football Hall of Fame in 1977, where he was proudly presented by friend and Giants owner Wellington Mara. Twenty years later, Gifford returned the favor and presented Wellington at his induction in 1997.

Gifford became the face of ABC Sports, anchoring Wide World of Sports, covering the Olympic Games, golf, and occasionally hosting the morning news program Good Morning America. Gifford continued as Monday Night Football’s from 1987 through 1997 before retiring from broadcasting for good in 1998.

Gifford’s number 16 was retired by the Giants prior to the 2000 season. It was the 12th number retired by the franchise, and none has been retired since.