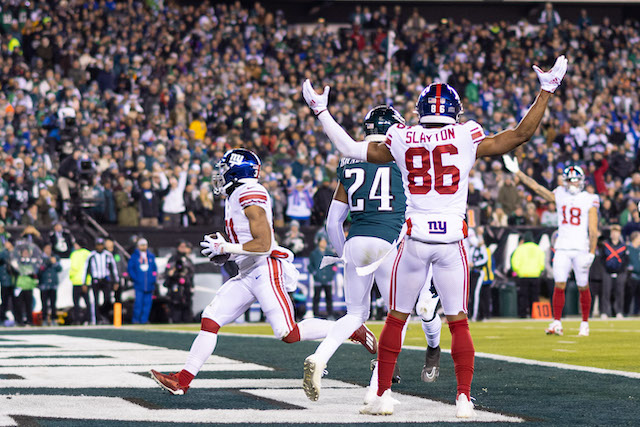 PHILADELPHIA EAGLES 38 – NEW YORK GIANTS 7…
The New York Giants Cinderella season came to a crashing end in Philadelphia on Saturday night as they were crushed 38-7 by the Eagles. The Giants finished their surprising 2022 campaign with a 9-7-1 regular-season record and a 1-1 post-season record.

The contest was basically over by halftime. The Eagles scored touchdowns on four of their five first-half possessions while the Giants were shut out. Philadelphia’s drives:

Meanwhile, the Giants’ first drive ended with quarterback Daniel Jones getting sacked on 4th-and-8 at the Philadelphia 48-yard line. On the second play of their second possession, Jones was intercepted by former Giants’ cornerback James Bradberry at the Philadelphia 46-yard line. New York’s other three first-half possessions resulted in a total of 17 yards, no first downs, and three punts.

The second-half of the game was pretty anti-climatic. Both teams exchanged three-and-outs to start the 3rd quarter. The Giants then drove for their only score of the game, a 10-play, 88-yard effort that ended with a direct snap to Saquon Barkley, who handed off to fellow running back Matt Breida for an 8-yard touchdown. With 6:15 left in the 3rd quarter, the Giants trailed 28-7.

The Eagles picked up two first downs and then punted on again on their second possession of the second half. New York then also picked up two first downs, but Head Coach Brian . Daboll decided to punt the ball away on 4th-and-6 from the New York 42-yard line early in the 4th quarter, down by three touchdowns.. The Eagles responded with a 15-play, 70-yard drive that lasted almost eight minutes and resulted in a 30-yard field goal. With just over five minutes in the game, New York now trailed 31-7.

The Giants then ran the ball three times in their final five plays simply to end the game.

Jones finished the game 15-of-27 for 135 yards, no touchdowns, and one interception. He ran the ball six times for 24 yards, but was sacked five times. Wideout Richie James was the leading receiver with seven catches for 51 yards. No other Giant had more than 21 yards receiving. Barkley broke off a 39-yard run in the 3rd quarter, but was held to 22 yards on his other eight carries.

The defense also played a bad game, allowing an unacceptable 268 yards rushing and only stopping the Eagles four times on 14 third-down conversion attempts. The Giants only had one sack and one pass defense. Quarterback Jalen Hurts was never hit except for the one sack. The team also did not force a turnover.

CB Cor’Dale Flott suffered a hamstring injury and did not return.

WHAT’S UP NEXT…
Players will be available in an open locker-room setting on Sunday. General Manager Joe Schoen and Head Coach Brian Daboll will address the media on Monday.